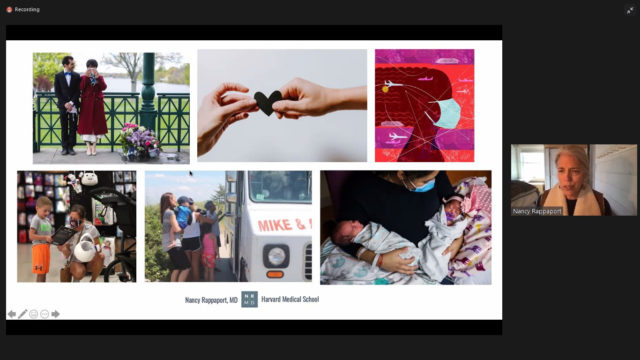 Originally published in the Lowell Sun.

Appearing on computer screens throughout the region on Wednesday, Tammy Bernardi — an expert in child abuse prevention — told the dozens of webinar participants to picture a child they care deeply about and to hold them in their minds as she speaks.

“Because when we think about those children that we love,” Bernardi said, “we can all start from this place where we agree that we want them to be safe and loved, and grow up to be healthy and strong adults.”

“One of the other things we can agree on is it takes more than one person to do this,” she continued. “It takes the collective work of all of us.”

Bernardi — a prevention training specialist at the Children’s Trust in Boston — was one of five panelists who spoke during the Zoom webinar organized by the Mahoney Family Event Fund on Wednesday evening.

The free event, titled “Kids Count in Our Community: the Pandemic Hits Home,” was organized with the goal to mitigate the traumatic impact the pandemic has on families by “offering paths to insight,” according to a press release about the event.

“Too many people are feeling continuous levels of toxic stress that are damaging to well-being and complicating daily life,” the release states. “Too many families are overwhelmed, under equipped and unraveling.”

The Mahoney Family Event Fund Committee was created by Tewksbury native Maureen Mahoney, who has devoted herself to helping others impacted by violence since her parents and brother were murdered in 1975.

Mahoney was on hand for Wednesday’s webinar, and spoke about the horrific experience she endured approximately four and a half decades ago.

In was New Year’s Eve in 1975 when Mahoney arrived at her parents’ home on Whipple Road in Tewksbury and found her parents, Dr. Hugh and Ruth, as well as her brother John, shot to death. They were killed as part of a planned armed robbery, according to Mahoney, who was 21 at the time of the shooting.

The violent death of Mahoney’s loved ones provides an extreme example of toxic stress.

“The four perpetrators that invaded our home had violent backgrounds,” Mahoney said. “Their criminal backgrounds started in their early teens. They came from homes rife with domestic violence and often egregious abuse. Research tells us the violence begets violence, just like peace begets peace. The behaviors learned, or rather copied at a young age, become deeply ingrained and these behaviors often become lifelong habits. Habits that are passed on from one generation to the next.”

The decision to organize Wednesday’s webinar was out of the concern that stress is taking hold of families, as the coronavirus pandemic has “upended any semblance of normalcy,” according to Mahoney.

As was shared by participants during the webinar, the data suggests there has been an increase in domestic violence and abuse since the pandemic began.

According to statistics provided by Bernardi, a child is "abused or neglected every 11 to 12 minutes."

“We also know that when it comes to abuse, approximately one in four girls and one in six boys is sexually abused,” Bernardi continued. “And those numbers vary somewhat over time as we learn more information and as more adults come forward and disclose, but what we do know is that in those cases, over 90% of the time, the abuser is someone the child knows. In a third of those cases, the abuser is another child.”

Bernardi discussed abuse prevention methods, which largely revolved around the importance of providing pathways of communication. She encouraged each person in the webinar to provide support to all parents they know and to become active in the lives of the children close to them, allowing the youth to feel comfortable enough to approach them.

“We know when kids have trusted adults in their lives, that helps them to thrive and allows them to grow to be safe adults,” Bernardi said.

Also speaking on Wednesday was Middlesex District Attorney Marian Ryan, who referenced a Boston Children’s Hospital study that suggested from July to October last year, there was a 47% increase in the number of adolescents requiring hospitalization for mental health issues.

“We are definitely seeing that, and although we’re pretty well resourced in a lot of areas in Massachusetts, children’s health is severely lacking,” Ryan said.

“Coupled with the racism pandemic we’ve been dealing with as well, I think kids have a lot of unaddressed fear right now that as parents, it’s our job … to give them a space to talk about that,” she added.

“Think of when you come home from work and you’re tired and you just want to get in bed and unwind,” Goode said. “So this is what you want to do. However, you get home and there’s cleaning to do, cooking to do, homework help, there are dogs barking, you have a headache. You want to rest, but your reality is you have to do. That space in between is stress. The space in between is unmet expectations.”

Goode encouraged webinar participants to “take inventory” of how they are feeling from day to day, and to stay connected with family and friends with phone calls and virtual get-togethers. She encouraged people to practice empathy with their children, practice self care and to forgive themselves.

For more information about the Mahoney Family Event Fund and to watch a recording of Wednesday’s webinar, visit mahoneyfamilyfund.com.

Read the full story at the Lowell Sun.