Vanessa learned about the playgroups at Valuing Our Children, a Children’s Trust Family Center, when her son was 3 years old - and she admits she was a bit hesitant at first. “Nothing is ever free. It seemed too good to be real,” she said. But after her first playgroup, she was hooked.

She started signing up for as many parenting classes as she could and even began running groups when her son went to kindergarten.

“I always learn something new in every class I take, even now,” she says. 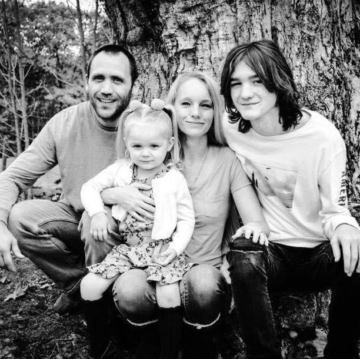 Vanessa and her family

Vanessa’s son is now 18 years old and, her blended family has blessed her with wonderful stepchildren and a now 4-year-old daughter – all of whom have experienced playgroups and the many programs at the family center over the years. She says it has been particularly helpful for her blended family because of the support for both moms and dads and the guidance in how to effectively co-parent.

Vanessa says one of her favorite things about the parenting classes is that she gets to meet parents from so many different backgrounds and experiences who all bring their own styles and perspectives to the conversation.

“When you hear ‘parenting class,’ you might think it’s just for parents involved with the Department of Children and Families, but it’s not like that at all. It’s a support group and you have parents from all different walks of life coming together to share experiences and really just support each other. It’s refreshing,” she says.

Now, 15 years after her first playgroup, Vanessa is both a participant and a leader at the family center. She has been involved in everything from running playgroups to serving in a coordinator role. She is still signing up for classes and both attending and running groups, even as an experienced mom and volunteer.

The Children’s Trust’s network of six Family Centers serve over 12,000 parents, caregivers, and children in over 30 communities across Massachusetts.