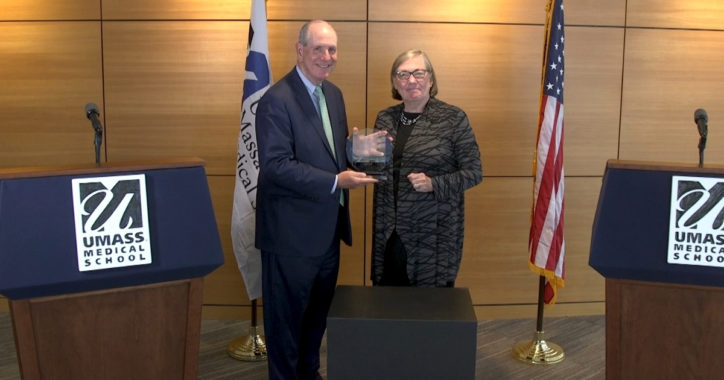 “We could not be more delighted to recognize Dr. Collins who worked closely with Governor Paul Cellucci to create the UMass ALS Cellucci Fund. Michael is also the father of 2 and the adoring grandfather of 2 small grandchildren,” said Suzin Bartley, Executive Director of the Children’s Trust. “Michael understands the importance of being a dad and he understands how fatherhood programs can provide dads with the tools and the skills to be successful raising safe and healthy children.”

Dr. Collins was instrumental in the creation of the Cardinal’s Commission for the Protection of Children and ensuring that child safety was its priority. He has also served as a mentor and father figure to countless students, including those from the College of the Holy Cross, where he will receive an honorary degree this year.

“It’s a privilege to accept the 2021 Governor Paul Cellucci Fatherhood Award. Governor’s Cellucci’s proud legacy lives on. His leadership and support in the realm of father engagement has inspired us all,” said Dr. Collins. “The role of father is a privilege – and a responsibility – and the special bond between a father and his child must be cherished. Fatherhood is an investment in a child, the benefits of which last generations.  The Children’s Trust represents our collective commitment to ensure that kids grow up with a nurturing and involved father by their side.”

Dr. Collins was appointed chancellor of UMass Medical School in 2008 after serving in an interim capacity. Prior to joining the medical school, he led the UMass Boston campus from 2005-2007, making him the longest-tenured chancellor within the UMass system. Dr. Collins also served as president and chief executive officer of the Caritas Christi Health Care System from 1994 to 2004. An alumnus and former board chair of the College of Holy Cross and a graduate of Tufts University School of Medicine, Dr. Collins is a board-certified physician in internal medicine. He is a Fellow of the American College of Physicians, as well as an Honorary Fellow of the Royal College of Surgeons in Ireland.

The Children’s Trust Fatherhood Initiative works to advance activities and trainings that support fathers, their families, and the professionals who work with them.

About the Children’s Trust

The Children’s Trust is on a mission to stop child abuse in Massachusetts. We give parents the tools and resources to build self-confidence and gain lifelong skills to ensure children grow up safe and healthy.