Martha's Vineyard Family Center Goes Above and Beyond 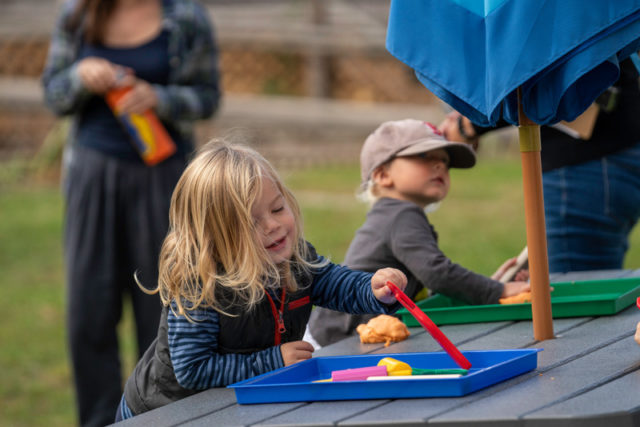 As featured in the Martha's Vineyard Times

Parents call the Martha’s Vineyard Family Center a lifeline. Before, during, and after the shutdowns and quarantines of the COVID-19 pandemic, the early years of a baby’s life can be a lonely and isolating time for new parents. Indaia Whitcombe grew up on the Vineyard, but she lived in North Carolina for 10 years and moved back to the Island just before 2020. “It was a strange and uncertain way to re-enter this community,” she said. She was in lockdown with three small children — her daughters are now almost 5, almost 3, and 14 months old. “The programs through the Family Center were an actual lifeline for me as a parent and as a human being. It’s a wonderful group of people who are there as a support network. I don’t think any parent can know what resources they will need, and the Family Center provides that support in an open and unconditional way.”

The Family Center is part of Martha’s Vineyard Community Services’ early childhood program and provides support for families with children from prenatal/preadoptive up to age 8. The center was at the Martha’s Vineyard Regional High School for many years, but moved to an old Nathan Mayhew Seminars building in 2014, which is now owned by MVCS. The Youth Task Force and MVCS’ early intervention program also rent space in the building. Inside, the Family Center has play areas, a small kitchen, and a swap shop, where parents can leave gently used clothes, toys, and baby equipment, and pick up what they need. It’s possible to clothe babies and toddlers almost entirely from the swap shop. “The swap shop, that’s the best,” said parent Amanda Zoref. “It’s where you can bring stuff and get stuff you need.” The Family Center also has a food pantry.

Kim D’Arcy, the Family Center’s program coordinator, says that the bulk of the center’s work is connecting parents with concrete services like access to health and developmental screenings, WIC, SNAP, M.V. Mediation, and Vineyard Health Care Access. Families often use one aspect of the Family Center’s offerings, but not the others. Perhaps the most commonly known resources of the Family Center are its playgroups for young children, parent education programs, and support groups.

One of the most popular and long-running programs at the Family Center is Baby’s First Year. Jacqueline Foster participated in Baby’s First Year when her 4-year-old, Isla, was a baby. “It was great, such a lifeline, he being my first and only, and having no clue,” Foster said. “It was great to have the community support of other women who have some wisdom to pass on.”

Zoref brought her daughter, Esme, to the group. “It was a saving grace,” she said. “We were isolated and my family couldn’t really come, and so it was great to have a weekly outing.” Pre-pandemic, the group met indoors, and last year smaller groups met in person.

Now, Baby’s First Year and several playgroups meet on the Family Center’s fenced lawn. It’s a green and sunny space, well-equipped with toys, including giant blocks, a playhouse, and a soft sitting area with board books. The lawn play area opened in July of this year, after some of the woods had been cleared to make it safe and accessible for families. A permanent shade structure was just added, too, making it more usable in inclement weather. As the season turns, the Family Center is taking things one day at a time, but may add indoor activities for small groups in colder weather.

Kristen Coogan is the playgroup facilitator, overseeing activities for the parents and children who come to the drop-in playgroups and story times throughout the week. She sets out toys, talks with parents and children, and helps tend the Family Center’s vegetable garden in collaboration with Island Grown Initiative. There’s a twice-weekly play and learn group, a music and movement class, story times, and a dads’ play and learn group on Saturday afternoons. There are other programs that require preregistration. In October, the Family Center collaborated with the Sheriff’s Meadow Foundation for outings at Cedar Tree Neck, Misty Meadows, and Sheriff’s Meadow. A story walk at the FARM Institute stretches a children’s book, page by page, along a walking route. Barn Buddies is a playgroup at the Agricultural Hall on alternating Sundays in the fall. These get kids and their families out to experience more of the Island.

All of the programming is for young children and their parents or other family members. Sometimes grandparents, aunts, or uncles bring children — but the center is for families, not just the children. Parent education programs teach a range of skills to address the many practical and emotional challenges of parenting and child rearing. Parents’ nights out give them a chance to get together and learn something without their kids for a couple of hours. Parent feedback shapes the programming, whether through informal feedback, surveys, or the Parent Advisory Council. The PAC has 11 members, and meets monthly to review and plan programming and to make sure that the Family Center is addressing the community’s needs.

But on colder weather in the air. All activities are free of charge, thanks to grants from the Massachusetts Children’s Trust, the Department of Early Education and Care, and the Coordinated Family and Community Engagement Grant program. The Family Center is a source of practical help and a welcoming space for babies, children, and their families, both those who have been here awhile and those who are new to the Vineyard — a place to build community and to enjoy the company of other kids and parents.