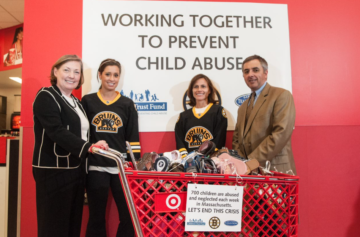 Originally featured in the Milton Times

For the past 30 years, Suzin Bartley had overseen the Children’s Trust Fund as executive director, growing it into a multimillion dollar organization that funds over 100 community-based organizations throughout the state.

She began her work at the Children’s Trust back in September of 1992.

Bartley has received multiple awards throughout the years for her work.

In July of 2012, she received the Day-Garrett Award from the Smith College School of Social Work, her alma mater.

This award recognized her contribution to social work and membership in the School for Social Work.

Bartley received an honorary doctorate in public administration from Curry College and is a member of the BC School of Social Work Advisory Board and the United Way of Massachusetts Bay’s Healthy Childhood Development Impact Council.

The Children’s Trust, a public-private partnership, is the Commonwealth’s child abuse prevention agency. Its role is to bring strategies, funding, training, data collection, and evaluation to communities across the state.

The Trust follows the Protective Factors Framework that was developed by the Center for the Study of Social Policy and shows five key conditions that need to be in place to support children and families, including: parental resilience, knowledge of parenting and child development, social connections, concrete support in times of need, and social and emotional development of children.

“It’s about wrapping that protective quilt of community around families,” Bartley said in a recent interview.

The Trust’s biggest program Healthy Families is a home-based family support and coaching program that supports first-time parents 23 and under to help them create stable and nurturing environments for their children.

Parents are matched with a trained professional who visits the home to provide support during the first three years of the child’s life.