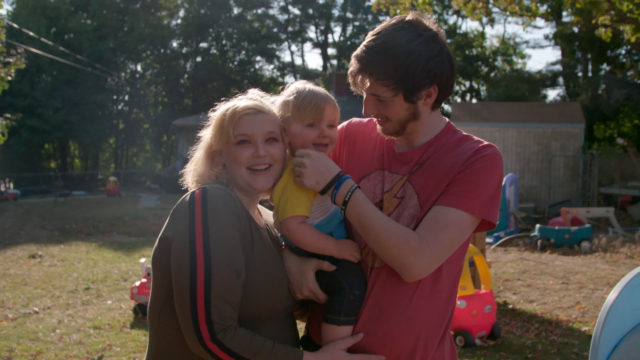 “I want to be a good dad because I had father figures that weren’t really there for me in my life. I want to be better than that for my son.” Those are the words of Healthy Families participant Justyn Grunchy of Brockton. Justyn and his son Holden’s mother, Kaleigh King, began working with the Children’s Trust Healthy Families program when Kaleigh became pregnant at 17 years old.

“The doctor gave me a brochure about Healthy Families and said she understood that it would be tough to be a parent at such a young age and that this program would help us with a lot of things, like co-parenting. I called them right away because I knew we would have different parenting styles and it wouldn’t go well if we didn’t learn how to come to a happy medium together,” said Kaleigh.

As young parents, Justyn and Kaleigh recognized the need for support and relied on their Healthy Families home visitor, Ken, to help them learn about parenting skills and set expectations for what it’s like to be a parent. He also helped them get appropriate supplies for the baby. One of Justyn and Kaleigh’s biggest goals as parents has been to effectively co-parent Holden. Both parents are committed to being part of his life, which means learning how to raise a child together. They are so committed to this goal that they even attended a special workshop to help them learn co-parenting skills.

“I want to be the best dad I can be, that’s the seed he put in my head,” said Justyn when asked how his home visitor helped him. As a foster child, Justyn moved in and out of different foster homes, leaving him without consistent, stable parental figures in his life. He is committed to giving Holden a different childhood and you can hear the love and commitment in his voice when he talks about his son.

In addition to helping with Holden’s needs, Healthy Families also helped Justyn and Kaleigh adjust to life as parents while continuing to pursue their goals and aspirations. One of the first goals they set together was to ensure that they both graduated from high school, achieving that milestone in June of 2019. Justyn is now working full time to support the family.