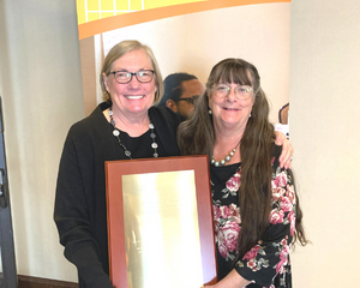 As featured in the Greenfield Recorder

The Francis Litman Leadership Award is given annually to an individual who has been in the parenting support field for at least 20 years; who exemplifies qualities of a strong, natural leader; and who has made significant contributions to parenting education, according to a Children’s Trust press release. It is named in honor of Francis Litman, who was a member of the Children’s Trust board of directors, founder of the Families First parenting programs and founder of Wheelock College’s Center for Parenting Studies.

Jones began her work as a family support worker for The United Arc of Turner Falls and co-founded its Positive Parenting program, according to the release. She is also the former co-president of The Association for Successful Parenting and the former director of The United Arc’s Family and Youth Services Department.

While working at The United Arc, Jones led facilitation of the nonprofit’s first group-based parenting and education support groups, the release states. Through these programs, she and her staff developed best practices and creative strategies to support parents with cognitive and intellectual challenges that were shared with legislators and other high-profile leaders.

“Sue Jones’ award by the Children’s Trust is undoubtedly well deserved,” Bruce Biagi, president of The United Arc’s board of directors, said in an email. “She is held in the highest regard by those who worked with her over her long career. Her dedication and creativity set an example for all to follow. Even in retirement, she continues to advise and provide valuable guidance to The United Arc as we set our course for the future.”

“Sue dedicated her career to providing services to parents with intellectual and developmental differences. Her mission to meet parents where they are and value their strengths led her to pioneer programs and organizations that wouldn’t exist without her tireless leadership,” Suzin Bartley, executive director of the Children’s Trust, said in the release. “Sue continues to be a leader in her field and is committed to furthering community-based partnerships to serve children and families. Sue is an inspiration and a joy to all who have had the privilege to work with her.”

“If it wasn’t for the Children’s Trust, my career and the Positive Parenting program would not have been what it was,” said Jones, who received the award during the “A View From All Sides Conference” in November. “They took a chance on us and gave us our first funding, and that’s what started the whole thing. All parents deserve opportunities to care for their children without judgment. They all have strengths and abilities.”